Free shipping on orders over $99

For many offshore anglers, marlin fishing is the holy grail of the sport. Marlin are among the fastest and most powerful fish in the world—reeling them in is a fierce battle, and actually landing one is truly a legendary feat.

Breathtaking in their majestic size and otherworldly beauty, it’s no surprise that marlin are highly prized trophy fish. The massive payouts tournament anglers can earn catching marlin is undoubtedly another major motivator, not to mention a lifetime of bragging rights.

To put it lightly, if you’re considering fishing for any of the iconic marlin species, you’re going to need to bring your A-game. Follow these tips to gain a competitive edge.

Be Ready for a Fight 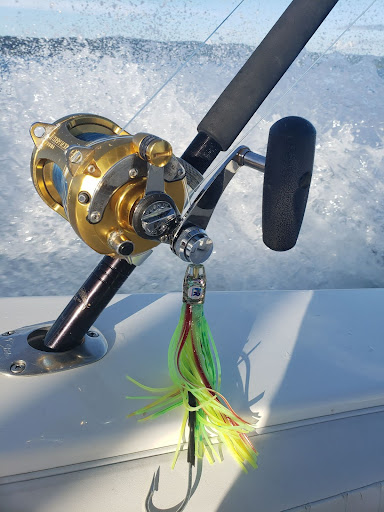 Marlin fishing is physically demanding and requires patience, but when they hit, they hit hard. Be prepared for an intense fight from the moment the marlin strikes. They’re known to leap, shake, and twist, so make sure you and your gear are up to the task.

On average, marlin swim at speeds around 50 mph, but some are capable of hitting staggering velocities as high as 80 mph. When prepping for marlin fishing, be aware that a marlin can take off with 200-300 yards of line in mere seconds.

While reels are largely a matter of preference, a wide, large-volume volume reel with a substantial line capacity is usually the best option. Get familiar with the ins and outs of your setup, especially your reel’s drag system. Use only the highest quality equipment, or be prepared to lose it.

Use the Right Lures

While you can fish for marlin with live bait, we highly recommend our marlin chugger and range lures. The vibrant colors attract high-speed game fish that may overlook the more subtle lures. These marlin fishing lures also feature a soft lure head with a deep concave design that delivers excellent action at various trolling speeds (6-14 knots is the sweet spot). The tentacles have a thin diameter that moves realistically in the water, and they do a great job hiding the hook without getting in the way when the marlin strikes.

It’s no secret that dredge fishing raises more fish to the surface, including marlin. Most marlin fishing boats pull a dredge or two to increase their odds of landing these magnificent fish. It’s important to use high-quality dredges that will hold up and withstand conditions. Make sure to always bring back up dredges in the event that one breaks.

Any angler can agree that having the right rod and reel set up is essential for fishing for big game fish — especially marlin. We suggest using a convention smooth lever drag 80 to 130-class reel and spooling up with an 80 to 130-pound monofilament line.

Every angler has their own lure preferences, and you can never have too many options in your tackle box. All of our marlin lures are extremely productive, so you really can’t go wrong. We offer a wide variety of other saltwater trolling lures, so don’t be afraid to experiment. Many of our saltwater lures are quite versatile and effective for marlin fishing, as well as for catching other large game fish.

Marlin species and fishing locations vary, so you may need to adjust your approach based on the type of marlin you’re trolling and the local conditions. If you're planning a trip, feel free to contact us for personalized lure recommendations from our knowledgeable pro staff. Increase your odds of landing a legendary fish with top-of-the-line tackle from Fish Razr.